Art authentication certificate for a painting, is it indisputable?

I am working on art authentication for almost 20 years in the USA.
I see experts for  Pablo Picasso that changed 3 times of authority status for the last 20 years.
When I started work on Picasso authentications in the 90's it was " Comite Picasso in Paris" who was the authority until 1993 , year the "Comite Picasso" was dissolved, the given reason was a disagreement between Maya and Claude both children from Pablo Picasso from different beds , it was said in private cercles some experts from this " comite Picasso" received amounts of money to agree on an authentication of a painting, none of it was proven so until today it is considered as simple gossip.

After the dissolution of the "Picasso comite" Maya Picasso was considered the sole recognized authenticator. Usually people accepted her certificate as being sufficient to warrant the sale of a painting. Important auctioneers however were still looking to have the certificate from both of them Maya and Claude Picasso. This second opinion looks to be a very good choice made by the auctioneers since Maya Picasso today is no longer the sole recognized authenticator. This brings up of course many interrogations for collectors who have a certificate of authentication made by Maya Picasso only. Indeed today it is the Picasso Administration who gives his agreement for the authenticity of a painting. This Picasso Administration is composed by 5 heirs of Pablo Picasso but where Maya Picasso is excluded.

As for every important master if you want to sell a painting you will need to have a certificate of authenticity not older than 3 months.

By example Andre Lhote, important French master with results up to 2.5 M $, when heir and recognized sole authenticator expert Jean Bouin died, the new sole recognized expert Mrs. Berman-Martin refused several artworks authenticated by Jean Gouin, under the motive that the last had made too much blunders. Today you have many lawsuits going on , understandable since collectors bought in auction or in private paintings having the Jean Gouin certificate which was the only one recognized as valid.

The contestations are also active for very important masters so Pierre Auguste Renoir, with results in auction as high as 71 Million $ . The sole recognized authenticator  Francois Daulte recognized at the end of his life several paintings by Renoir which after Daulte's dead were contested immediately by Dauberville . It turned out that  Daulte family was involved with the Wildenstein family in the hijack of 3 Manet paintings with an invaluable value  and 1 Corot paintings worth well over multiple M $ today, at the cost of Yves Rouart , legal heir of Berthe Morisot the famous painter who owned these paintings. 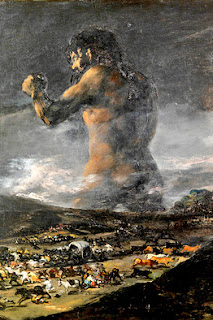 Manuela Mena, curator for the 18 th century paintings of the famous Prado Museum in Madrid, in June 2008 declared that the most famous painting by Goya was no longer painted by him but by supposedly Asencio Julia because they discovered on the painting a monogram : AJ ... which is really not convincing that this scholar painted the Colossos... This Colossos was described by Charles Baudelaire, the French writer as : "Giving the monstrosity the ring of truth " to show the maestria of Goya ... The painting was exhibited since 1931 in the Prado museum. Who painted it, God knows who ...

Is a certificate of authenticity valid for the sale of an artwork?
to be continued